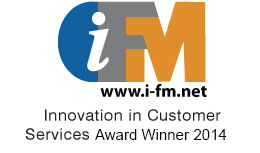 The winners of i-FM”s annual Technology in FM Awards have been named. Simon Iatrou explains the judging process, reviews the finalists and looks at what really made the difference for those who came out on top.

By far the closest competition of the day occurred in the communications & customer service category, in which ATOM, a new online taxi booking service for Birmingham Children’s Hospital, myISS, a smartphone app from the international service provider, and Gritit’s NIMBUS, a weather reporting and vehicle telematics system, did battle.

After considerable deliberation, ATOM came out on top thanks to the most clear and concise application of technology evidenced on the day. The creators at Anbinet were able to show a distinct need for the technology, the ease of its implementation in the hospital, the financial savings it’s delivering for the hospital, and the help it’s providing the patients.

It is apt that we finish in this category, as it highlights one of the key conclusions from the day and, most importantly, gives some insight into what technology we can legitimately call creative, effective and innovative. While something like the ISS app is available to a much larger audience (ISS employs close to 70,000 people in the UK), and is a sign of a big FM service provider attempting to tackle one the most contentious issues in facilities management – namely, the inclusion and empowerment of operational staff – the benefits of such technology are much more difficult to measure. ATOM, on the other hand, was not the most expensive or elaborate piece of software on show, but its impact on users was easier to identify than any other finalist – sealing the case for the top award.

Technology is a key component of progress; or perhaps it is more accurate to say: progress is an inevitable outcome of technology. Each time a new piece of technology comes into existence, it has the potential to change our lives irrevocably. One only has to look at today’s press coverage to see just how much the adoption of automation is impacting public life – for better or for worse. The recent strike action by the London Underground workers who belong to the RMT Union, for example, is centered around a row over the closure of ticket offices and the increased reliance on computer-operated mechanisms such as the Oyster Card.

Technology that has the power to affect change often falls under the banner of ‘innovation’, which just so happened to be the key theme of this year’s Workplace Futures conference, where the 2014 winners were also announced. Naturally, therefore, this meant that innovation was to play a big part in the judges’ thinking.

However, innovation is notoriously hard to identify in facilities management –which is a big part of the reason why i-FM decided to shine a spotlight on this most elusive of concepts on the day. Clients ask for it, providers promise it and everyone celebrates it – but in the service sector, it’s actually pretty difficult to measure. As one managing director of major service provider told me recently, this is because facilities management, in its purest form, is a relatively basic concept; it’s one company signing a contract with another company, so that one group of people can deliver a service for another group of people.

Nevertheless, if you pay attention, there are some great examples of the use of casino pa natet technology in FM to help these services be delivered to a higher standard. While the influence of Palo Alto’s technocrats might not be immediately recognisable in the relatively glamour-free world of FM, technology like theirs is trickling down and changing the way facilities management services are being delivered – one of the key reasons why we had so many entrants for this year’s awards.

What were we looking for?

When the awards process began, we received 29 entries from the complete spectrum of FM. This number was then whittled down to nine – three finalists in three categories: commercial, operational and communications & customer service.

Once we had agreed upon the final nine, each of the finalists was invited to a special day at Compass’ headquarters in Surrey where they were asked to give a presentation on their technology and to possibly show it in action.

Each finalist was given a 40-minute timeslot to convince the judges why they should win; and the judges were marking them against six criteria: identification of need (key drivers/market research/strategy); implementation (resource for development/timescale/roll-out process); business case (cost of initiative/ROI); innovation (ease of use/platform range & accessibility); measurement of success (increase in productivity/organisational outcomes); and general application to FM (best practice/scalability of initiative).

The key thing to bear in mind for the judges was that each of these criteria applied more to some categories than it did to others. For example, it is much more important to judge the ROI of a piece of technology in the commercial sector, because that’s directly related to its core purpose and the business’ raison d’etre, than it is for, say, the communications & customer service category, where there may not necessarily be any real financial objectives behind the implementation of the technology.

Ambinet Shortlisted for the BCI Awards

A proud moment for Team Ambinet

Sorry, the comment form is closed at this time.